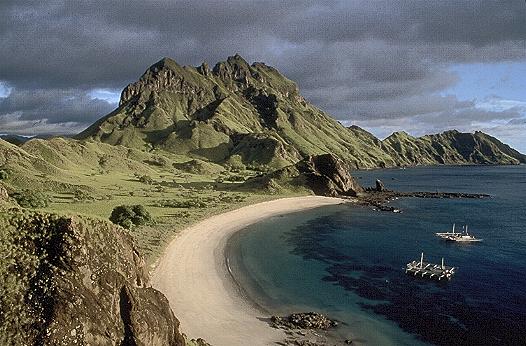 Located 300 miles east of the cultural center of Bali, Komodo Island is a remote, seemingly prehistoric part of the sprawling island nation of Indonesia. This portion of the Island Dreams' web site is dedicated to exploring Komodo National Park and the Komodo Island region, both above and beneath the waves. Our guides and resources for this adventure will be some of the world's experts on Indonesia and its diving. They include author Kal Muller, scientist/researcher Dr. Gerald Allen, dive leader extraordinaire Larry Smith, and Secret Sea Visions photographers Burt Jones and Maurine Shimlock.

Home to a wild population of more than 5,000 Komodo Dragons, a topside walking tour of Komodo Island National Park is an experience like none other. The smell of the sun-baked earth and the strange cooing sounds of the exotic, flightless magapode birds will stay with you for years after. Walking in the dry river bed, you can view the dragons' cave-like lairs, keeping an eye out for marauding individuals approaching from the jungle. Excitement mounts as you approach the dragons' "feeding station," where your accompanying Park Ranger may have to fend off the curious (hungry?) dragons with his stout wooden staff. The chance to view and photograph these remarkable and frightening creatures, literally face to face, is an experience the traveler will not soon forget. 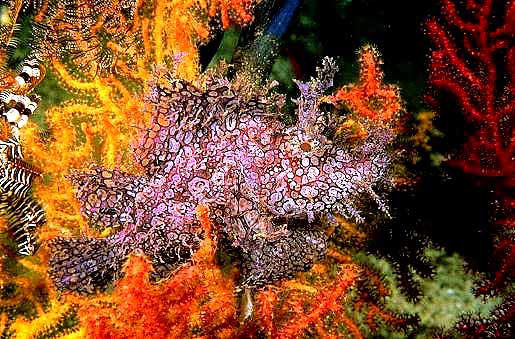 Beneath its surrounding oceans, experts believe Komodo to contain an apex global concentration of marine bio-diversity. As a result, Komodo is a paradise for scuba diving adventurers. Following are a few impressions penned by expert diver and pro-photographer Maurine Shimlock, "We enter the cool transparent water, leaving behind Komodo’s baking hot primeval landscape. Drifting easily down a volcanic slope flamboyantly adorned with soft corals, we slip through undulating masses of transparent fish. Perched on a mass of pastel-colored soft corals is a rare lacy scorpionfish, camouflaged as a filter-feeding crinoid nestled among the gorgonians. Moving carefully, and willing myself to breath calmly, I raise the camera to my eye and begin to photograph this exquisite creature."

Komodo and Indonesia will be offering excitement and adventure far into the 21st Century. Should you wish to join in the exploration, simply follow the links below for more stories, photographs, and enticing adventure travel opportunities.