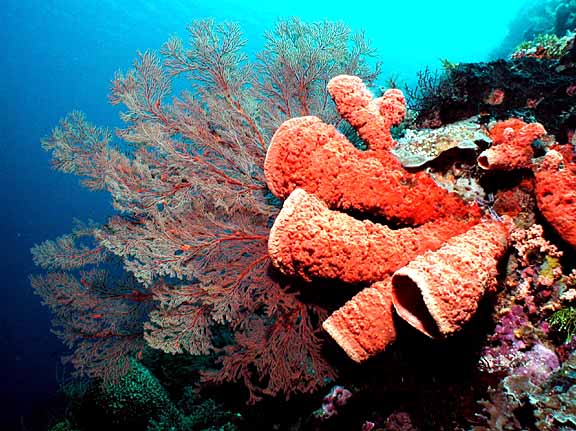 Images from Wakatobi, Indonesia,
and the Olympus 3040 Digital Camera


After shooting film cameras underwater for 25 years, the images in this gallery are the result of my first efforts at digital u/w photography. These pictures were accomplished at Wakatobi Resort, for the most part right off the beach in front of the resort. In this effort, I was greatly aided by professional photographer James Watt, who kindly supplied access to two different housing systems; and to Fred Dion of Underwater Photo Tech who aided me in obtaining the Olympus 3040 camera. Thanks Gentlemen!

The links below will lead you to the photos. Also included is a link to my written report, an introductory primer to shooting underwater with a digital photo system. I hope you find the images and information of value. Please note that this entire Web Site, and all photos and text contained within, are copyrighted. Please do not use any of these images or text without prior written permission.

Check out the photos below; then read Ken's: Digital Photography Report

Equipment Note: The first series of underwater images, as displayed below, were produced with the Olympus 3040 camera, contained in the simple, plastic Olympus PT-007 housing. Later in this series, you will see images produced with Light & Motion's aluminum Tetra Housing. A note below will indicate the equipment change. KDK
Change of Equipment: The following images were produced with the Olympus 3030 camera, in the Light & Motion Tetra Housing. As wide-angle was the concept, the Tetra's wide-angle port was fitted. Due to the fact that the lens on my 3040 is slightly longer than that of the 3030, my camera would not work in the 3030 housing with the wide-angle port. Thus I used Jim Watt's 3030 camera to make the following wide-angle images. Should you decide to purchase a housing, be aware of this compatibility issue. I hope you have found this information to be of value, and the images entertaining. Here's wishing you great diving...and a world of adventure!

Learn more about: Wakatobi and Indonesia


More info: Photographer Ken Knezick is owner of Island Dreams, specializing in scuba diving travel and tours. You are invited to call or e-mail for additional information, advice, or assistance with bookings and airfares.

In addition to this Digital Photo Gallery, and Island Dreams' general Photo Gallery, we are continually developing new destination-specific photo areas. Once you have perused these Irian Jaya images, following is a selection of other photo areas provided for your pleasure and information.

Irian Jaya Photo Portfolio - Also known as West Papua, Irian Jaya is the western, Indonesia-administered, portion of the huge island of New Guinea. The diving there is remote, virtually unexplored, and VERY fishy!

Wakatobi Photo Gallery - Do not miss these photos from Wakatobi, Indonesia, possibly the most beautiful and pristine reef diving, and what is roundly known to be the best house reef in the world!

Galapagos Islands Photo Gallery - These images were captured in the remote Galapagos Islands, located 600 miles off the Pacific coast of Ecuador. Inspiration to Charles Darwin, Galapagos represents a truly unique and unparalled paradise for topside and underwater wildlife photography.

Bahama Banks Photo Portfolio - Do you dream of diving with Dolphins? Take an Island Dreams web journey to swim with the Dolphins of the Little Bahama Banks.

Digital Photo Gallery - Digital cameras are revolutionizing the world of underwater photography. Island Dreams' digital gallery includes many descriptive photos, plus a complete report identifying some of your digital options and opportunities.

For more information, call, fax, write, or email us at:

Explore our Specials of the Month