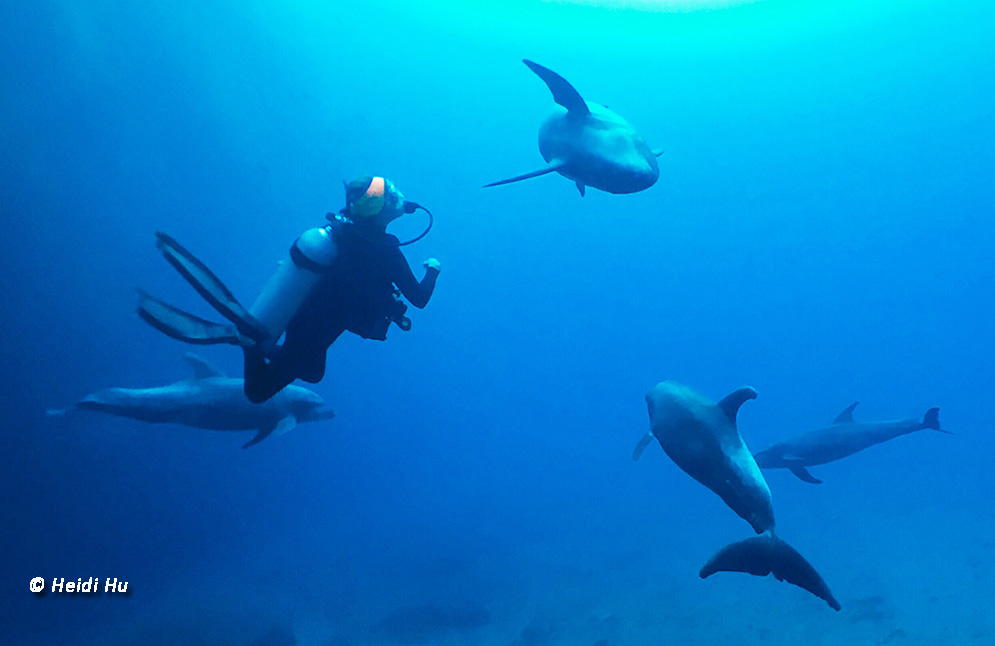 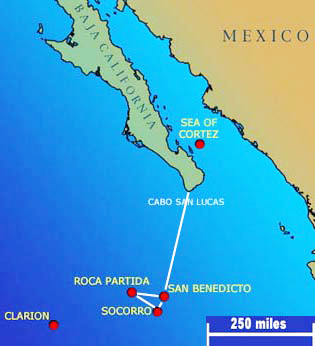 Our guests were transferred to the boat from the Los Cabos airport or nearby hotels. We were shown to our cabins and invited to set up our dive equipment. With a 28-hour boat ride ahead of us, and plenty of time to set up gear, many of us decided to visit with old friends, make new friends, read and nap; assembling our gear at our leisure. After a delicious dinner, we departed Cabo San Lucas about 9 PM in the light of the 'super moon,' with long rolling swells gently rocking us to sleep on our first night as sea.

Before telling you about our amazing underwater encounters, I must sing the praises of the crew of M/V Valentina. The first briefing, just after dinner Sunday, covered safety aspects of the boat, general diving plan for the week and teasers about what was sighted on the previous weeks trip. Lead divemaster Carlos introduced the rest of the crew. Miguel, our highly experienced captain, was assisted by seamen Carlos and Efrain. Efrain is also one of the panga operators, along with Jose. Yohana ran the galley, keeping us well fed. Rui, a delightful but lazy Japanese instructor (his words, not mine!) and Jenny, an English transplant instructor who has lived in Cabo for five years, rounded out the guides for our divers. Ramon is first engineer, assisted by Adan. Temo perhaps has the one of most important positions as barkeep. Even though each crew member has a specific job title, everyone does a bit of everything, especially when the divers are going out or returning from dives. It's 'all hands on deck' to assist divers getting into the pangas and reboarding the Valentina after the dives, they do their jobs exceedingly capably and always with smiles.

Often referred to as Socorro, the Revillagigedos Archipelago consists of four islands: Socorro, Roca Partida, San Benedicto and Clarion. Socorro, Roca Partida and San Benedicto are grouped relatively close together, while Clarion is about 125 west of the grouping of three. Dive season for this region runs from late November through the middle of May the following year. During our December trip, our diving focused on Socorro, Roca Partida and San Benedicto. The archipelago was designated a World Heritage Site in July 2016, and as such, is completely protected from personal or commercial fishing, discharge of any liquids or debris from vessels, and there is a strict 'no-touch' guideline. I remarked to Carlos that it's stunning to not see a single bit of plastic or metal or paper on the ocean floor during our dives - he beamed and proudly said yes, that is the work of the Mexican people to protect their lands and sea.

Almost everyone was awake each morning before the breakfast bell was rung - fueled by coffee and tea available 24/7 just outside the main salon, we ate lightly before the first dive of the day - fresh fruit, toast, cereal, yogurt and delightful Mexican sweet rolls, accompanied by juices. Following our return to the boat after the first dive, a bountiful and delicious hot breakfast buffet awaited us - scrambled eggs, bacon, sausage, oven roasted tomatoes, potatoes, flour and corn tortillas, pancakes, more toast, fresh fruit and yogurt. Between breakfast and the second dive the photographers had time to view their photos or footage from the dive, dry their equipment and make ready for the next dive. Lunch followed the second dive - more groaning boards as the buffet offered up fresh fish, chicken, vegetables, rice tortillas. There were tasty - and if you like spicy - homemade and bottled hot sauces and yummy homemade "pico de gallo" were on hand for guests to make their own tacos or burritos. Dinner was served to our tables each evening, commencing at 730 PM, with a glass of wine or a beer offered as we sat down. Dinner always started with amazing soup - I think the garlic soup was the favorite, a delicious homemade chicken broth with multitudes of slivers of roasted garlic. No vampires on the boat this week! Soup was followed by a salad, the entree and dessert. Our dinner entrees were beautifully plated and presented - steaks one night, pork loin slices atop a potato mash another night, lobster tails one evening, always with fresh vegetables, perfectly cooked, baked or steamed, such as asparagus, sugar snap peas or sweet potatoes. My sweet tooth hankers only for dark chocolate so I donated my dessert each evening to whoever gave me the saddest puppy eyes, but they looked beautiful and everyone raved about them. One evening in particular I recall - it was a just-right serving of ice cream with a side of fresh berries and a made-in-the-galley shortbread cookie. Perfection! Why do divers always have the mistaken notion we're going to be swimming sooooo much and will lose weight on dive trips?!? 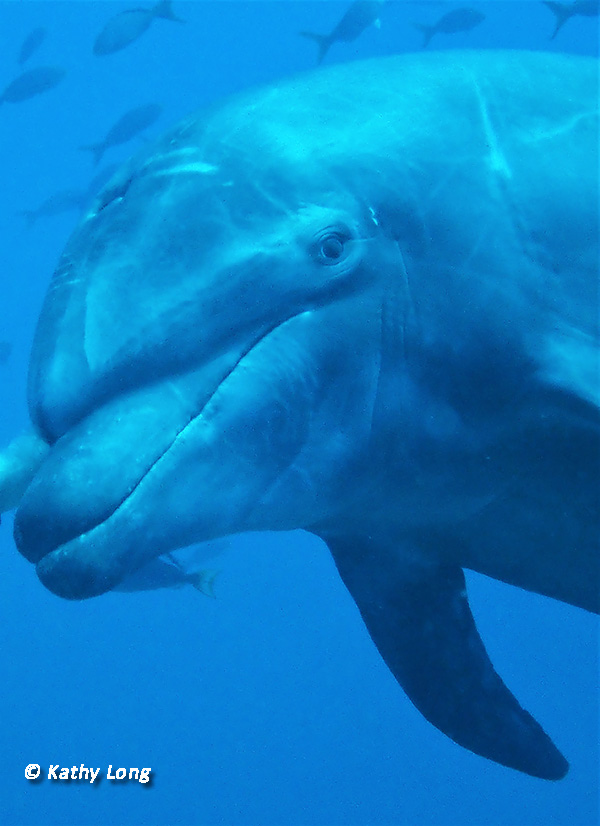 Each diver's station has a tank filled with air and a tank filled with 32% nitrox. Tanks are filled at the diver's station and three EAN analyzers are available for divers to use. A large plastic bin under each bench seat holds mask and other accessories between dives. There were plenty of wetsuit hangers to ensure your suit has a chance to dry a bit between dives. After two previous trips on the boat, I'd learned to turn my suit inside out, drape it across the stern railing in the sun and secure it with a weight. It didn't totally dry but it was very comfortable. There is a small white bin on the lower shelf under the camera table for items like combs, T-shirts, etc. Deck towels are readily available after rinsing in one of the two stern deck showers after the dives.

The crew reiterates the camera table is strictly for cameras, and with a dedicated double rinse tank for cameras, retractable high pressures hoses to blow water from camera and towels at the ready, the photographers were quite happy.

And now let me speak of the diving! There are two large pangas (motorized open boats) which can each hold eight divers. Each morning we were given the order in which the groups would launch. The divemasters rotate which group they will be guiding each day, so all the divers have an opportunity to dive with Carlos, Jenny and Rui. A dry erase board has detailed underwater topography depicted for each site we dive, with Carlos giving a very through briefing. Andale, andale! Gear up, walk to the opening along the starboard side, grasp arms of the crew in the panga and sit on the gunwale while the other divers board. Fins are distributed and away we'd go, usually only 5-10 minutes to the dive site. Once at the site, gear is checked again, and on the count of three, enter the water via a backwards roll, deflate BCs as needed and follow the guide.

What an amazing experience to slip into the 80-degree water, swim along the vertical rock face, view pile-ups of 4, 5 or more juvenile white tip sharks resting on a ledge. Or watch the face of our divemaster light up, cup his or her hand to their ear and make the sign for dolphins. Moments later, here they'd come, swimming up to us like we're their long-lost friends, dashing in between us, ever smiling. Carlos had cautioned us to not swim after them - 1.) they may feel threatened and swim off, but also 2.) they seem to sing a siren song, luring us to float down. Sure enough, we bubble blowers, mesmerized by the grace and play of the dolphins, occasionally found ourselves deeper than our profile, and glancing up to our guide, saw the hand signals indicating we needed to ascend a bit. The dive guides know the dolphins by their coloration markings, and by the scratches and marks on their bodies - they shared with us that the dolphins who were choosing to entertain us were longtime residents and the guides couldn't be more delighted that the pods seem healthy and intact.

Jenny found eels, octopus, and lobsters for us. Sometimes she would swim into the midst of an enormous school of big-eye jacks and be 'lost' for a moment, and of course, never tired of the encounters with the dolphins, mantas and whale sharks.

Remember Rui, the lazy Japanese dive guide and instructor? A most congenial and gracious fellow, he explained to us that he's 'lazy' in the water, which he defines as taking his time to swim along, he's not going to speed through the water. Just my style of diving! Rui's well trained eyes were always watching for shadows or movements - he would signal us silently to watch where his hand was pointing. Rewards for his keen awareness were bountiful - a pod of dolphins, the emerging shape of a whale shark or the slow-motion movements of a giant manta's wings. Rui was always looking out for tiger sharks - my group cut up with him quite a bit before boarding our panga, practicing our tiger-shark signals in unison as a 'summoning of the spirit' in hopes of sighting one (or two or seven). Alas, our week was without tiger sharks...possibly due in part to the copious laughter while 'summoning the spirit.'

One dive with Carlos was particularly memorable - we had seen three or four manta rays fairly close up and were happy to float at 15 feet for our safety stop. One of the mantas - I'm no expert in manta ID but could recognize the white markings of this one as one of the visitors from earlier in our dive - returned to spend the stop time with us, which extended to 20 minutes as the beautiful giant floated around and between us, enjoying our exhalation bubbles against its belly and probably our 'oohhs' and 'aahhs' as well. It was one of those crying-into-your-mask experiences. I do not recall any of the dives during which we did not see at least one of the 'trifecta' of large animals we longed to see - whale sharks, dolphins and mantas.

On the return voyage to Cabo, contact information was shared, photos were shared and experiences relived. A fun photo captures everyone's delight with the week's trip as we said our farewells. Big thanks to my bubble-blowing friends and dive buddies: Karen from Oregon, Linda, Treva, Rebecca, Kathy, Karen from Virginia, Charlene, Jim, Ken, Heidi and Paula. I'd dive with ya'll ANYTIME, you made this trip so fun! 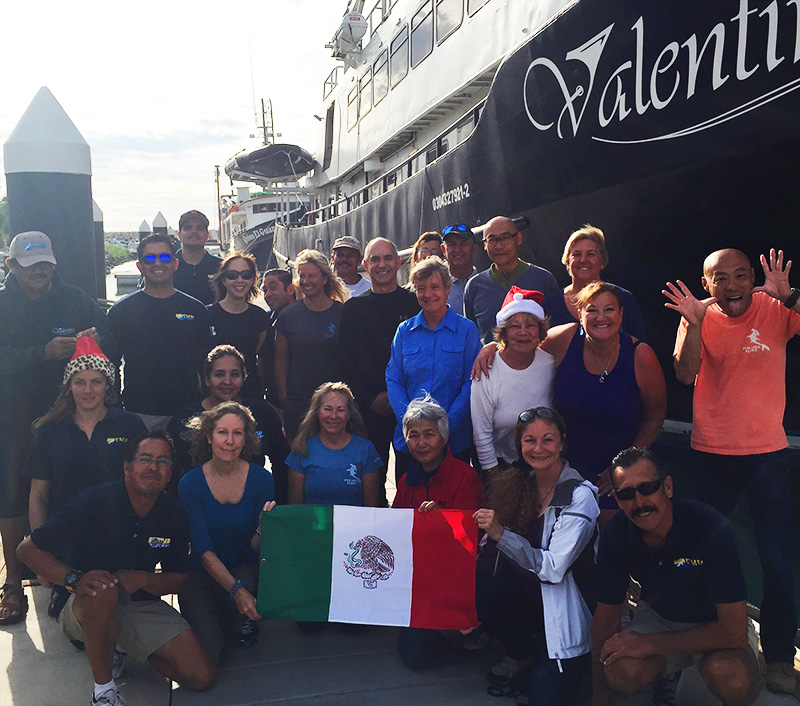