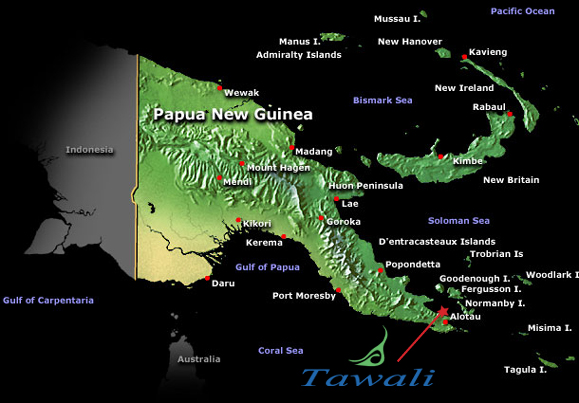 Papua New Guinea is a Remarkable World Unto Itself 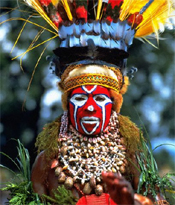 CULTURE - Papua New Guinea -- There are four regional, cultural and political groups: Papuans (from the south), Highlanders, New Guineans (from the north) and Islanders. Some authorities divide the people into Papuans (predominantly descended from the original arrivals) and Melanesians (more closely related to the peoples of the southwest Pacific), though some people (particularly those in outlying islands) are closer to being pure Polynesian or Micronesian. The dividing lines between these definitions is very hazy.

There are over 750 languages in PNG (representing about one third of the world's indigenous languages). This dizzying array has brought about the need for a lingua franca, and Pidgin (or Neo-Melanesian) has gained in importance and prestige in recent years and is great fun to learn. Borrowing words from many languages, it is primarily derived from English and German, but only covers about 1300 words. Many educated people would, however, prefer that you speak in English because Pidgin is seen as the vulgate of the bullying expatriate. Another popular language is Motu (or 'Police Motu'), the local second language of the Port Moresby coastal area.

The Christian church has been extraordinarily influential throughout PNG with most Papua New Guineans regarding themselves as Christians (the largest denominations are Catholic, Evangelical Lutheran and United). Pantheistic beliefs are also widespread and traditional rituals are integral to Papuan culture. For example, people who live in danger of crocodile attacks are likely to give crocodiles an important role in their culture, while farming communities often place much emphasis on the weather, accordingly celebrating fertility and harvest. Placating the spirits of ancestors is a dominant theme in traditional beliefs, while the fear of practices such as sorcery and witchcraft is also widespread. 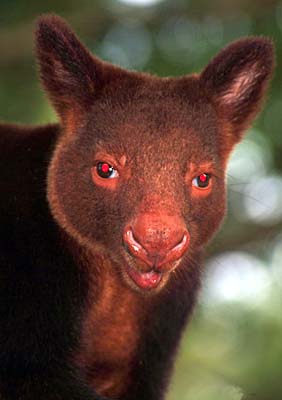 ENVIRONMENT - Papua New Guinea -- Papua New Guinea lies south of the equator and north of Australia. It's the last of a string of islands spilling down from South-East Asia into the Pacific, and comprises the eastern half of the island of New Guinea and a collection of surrounding islands. The country is dominated by a central spine of mountains, the Owen Stanley Range, with many peaks over 4000m (13,120ft). Three quarters of PNG is covered by tropical rainforests, and the remainder is made up of delta plains, flat grassland and mangrove swamps. The principal rivers include the Fly, Sepik and Ramu. The major islands of New Ireland, Bougainville and New Britain are surrounded by striking coral formations and are often scenes of unpredictable natural violence (in 1994, the once-beautiful New Britain town of Rabaul was destroyed by the Tuvurvur eruption).

There are close to 9000 species of plants in PNG, most of them found in lowland rainforests. Around 250 species of mammals live in the islands, mostly bats and rats, but also including marsupials such as the tree kangaroo. There are also two kinds of echidnas (spiny anteaters). The real treat however is the 700 species of birds. There are more parrot, pigeon and kingfisher species - from huge crowned pigeons to delicate pygmy parrots - than anywhere else in the world. Other notable birds are giant cassowaries, kokomos (hornbills) and cockatoos. The highlights of the insect kingdom are the world's largest butterfly, the Queen Alexandra Birdwing (the first collected specimen was felled by a shotgun blast), and scarab beetles (which are often used as body ornaments).

Papua New Guinea has only four national parks, including Varirata National Park and McAdam National Park, but more have been proposed. The major problems facing the environment and its flora and fauna are logging and heavy-metal pollution from copper mines such as Panguna on Bougainville Island (currently closed) and Ok Tedi in the Star Mountains.


SEASONALITY - Papua New Guinea -- The climate is typically monsoonal: hot, humid and wet year-round. There are defined wet (December to March) and dry (May to October) seasons, but both are subject to regional variation (especially in the islands). Rainfall, for example, varies tremendously: Port Moresby may experience an annual rainfall of 1000mm (39in) while Lae has over 4500mm (176in). In extreme rainfall areas, such as West New Britain, the annual rainfall can exceed 6m (20ft) a year. Temperatures on the coast are reasonably stable all year (hovering between 25 and 30C/77 and 86F) but humidity and winds are changeable. Temperatures drop at higher altitudes, and it can be very chilly in the Highlands. 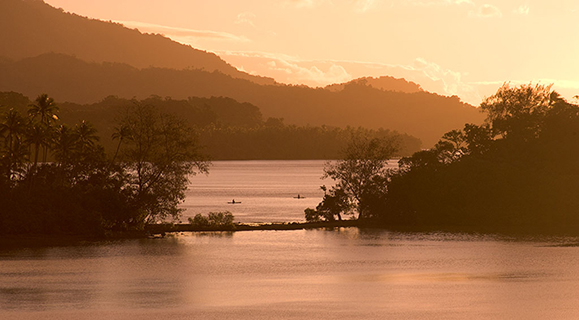